Things have been crazy with work and family issues so I really wasn’t expecting to get away over this past weekend. I decided I needed to get away, though, and get away I did. My truck has been in the shop so I bummed a ride with some guys from work and we headed north to Santee, SC. Santee is about 4 hours from Jacksonville.

The Sprawl was being hosted for members of hammockforums.net (REV in particular) and was my first out-of-state hang. We arrived around 3pm on Friday and were surprised by the large number that had already arrived. We all found some trees and setup our hammocks before it got dark. More people arrived throughout the evening and our numbers continued to grow. In an attempt to keep things simple some of us went into town to a local BBQ joint for dinner. 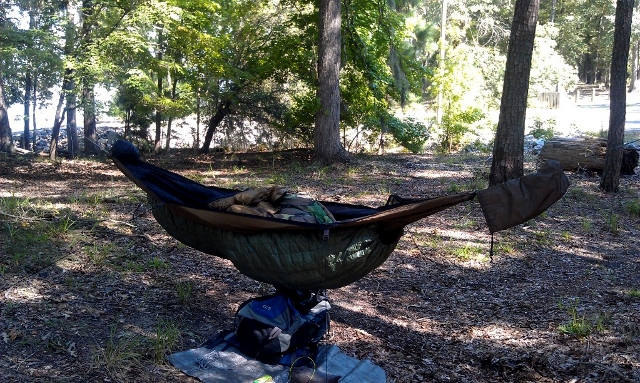 Unfortunately the group ended up dividing into two with each hanging out on either side of the group camping area. Our group turned out to have several former Navy guys so we spent the evening sharing sea stories and having a great time.

Saturday was pretty hot and the gnats were horrible. My friends Chad and Ryan along with Ryan’s son Spencer went kayaking. I spent most of the day relaxing in or around the hammock reading. The guys were gone for quite a while and I couldn’t take the bugs anymore. I decided to join the rest of the group in the lake. Lake Marion is the largest lake in South Carolina and covers close to 110,000 acres. We didn’t explore much of it but the water was cool, felt wonderful, and more importantly kept the bugs away. 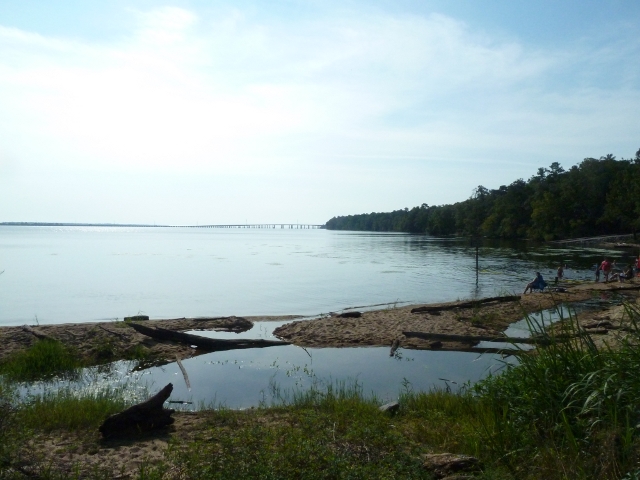 The other half of the group camping area was inhabited by a Scout group but we didn’t mingle much. Too bad. I bet we could have won some hammock converts. As it was we ended up with over 30 hammocks in the area! 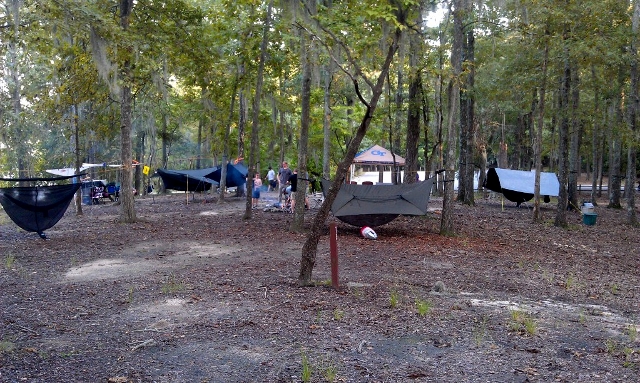 Saturday evening was supposed to be a group dinner. Unfortunately the rain started to fall hard and fast and while it didn’t end the festivities it put a damper on them. We crammed as many as would fit under the 10×10 canopy covering the food. Fortunately it didn’t last long but the grill never fired up again and people drifted back to their own activities. Before the dinner we did have a nice raffle with prizes donated by various gear manufacturers as well as some of the members. 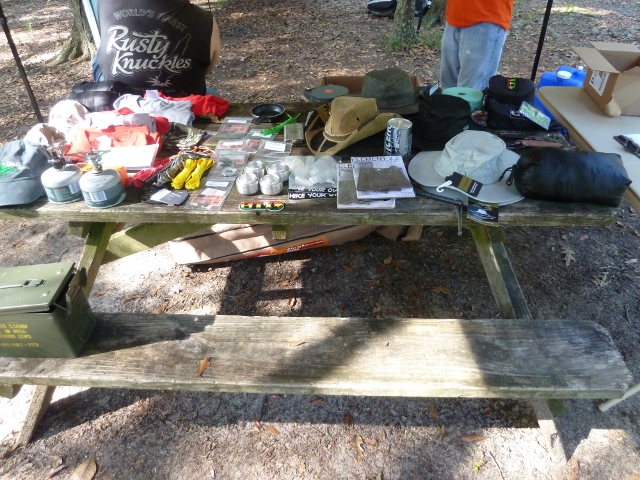 Our group gathered around the campfire again and tried to dry the chairs out. It became pretty comical. We had a great time and shared a lot of laughs. With the rain beginning to fall again most of us called it an early night and turned in. I awoke early Saturday morning to a wonderful sunrise upon the lake. 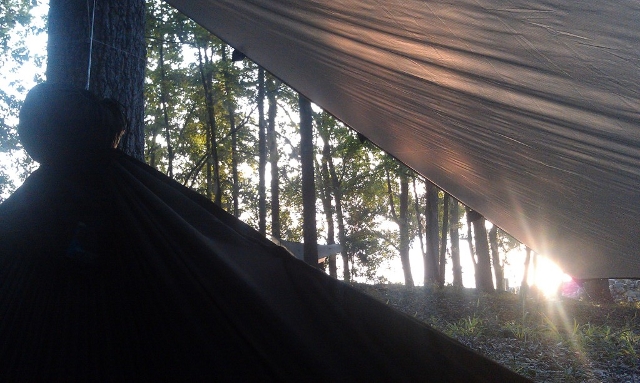 Aside from the gnats I hadn’t really experienced any issues with mosquitoes. In fact I was quite shocked that I was able to sleep both nights without the netting. It felt great! I did end up with a few bites so I guess they were there. I just didn’t seem them. The evening was warm but there was an occasional breeze. At 5:30 Sunday morning that changed dramatically. The wind really kicked up and it turned the hammock into an ice box. I sat there in my shorts and t-shirt wishing I had my insulation. Luckily for me the rain let up and I was able to run to the van. A quick trip later my underquilt was snug against the bottom and I wrapped myself in the top quilt. I was instantly toasty and quickly fell back asleep.

This was the first time I’d had my JRB tarp in inclement weather and it did a great job. It provided plenty of coverage and despite the hard wind and rain all of my gear was dry. The only problem I had is that I’d faced the ends to the lake to enjoy the view. When the wind came the tarp turned into a wind tunnel. Fortunately my top quilt made a great deflector shield and protected my face. 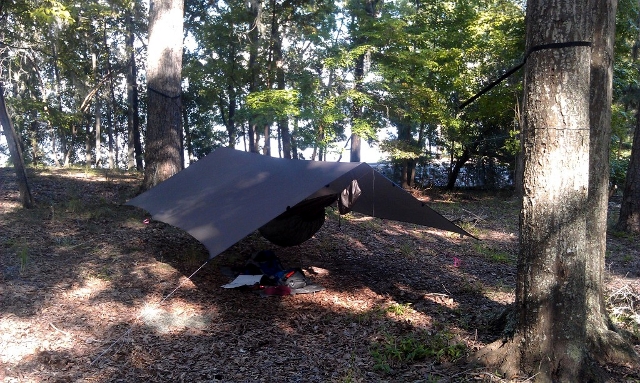 The biggest drawback to my site choice was that I didn’t think about the boat ramp. I had to contend with people coming extremely early which kept waking me up. I also had to deal with a street light (which I hadn’t noticed during the day) but it wasn’t as bad as I’d feared.

I finally got up around 8:30 and started breaking camp. After a mountain man breakfast from the Dutch oven we loaded up the van and were on the road about 1. Hopefully next year we’ll be a bit more cohesive. Regardless, I had a great time and I’m already looking forward to the next hang…wherever that might take me.