It seems that another year has flown by at an alarming rate. Here we sit already in December with the holidays looming right around the next bend. This weekend was the annual Trailblazer’s Christmas Campout. We held the event at the Ocean Pond group campground in Osceola National Forest. Several folks showed up Friday night with the bulk of us arriving on Saturday and camping overnight.

I’d hoped to get out Friday but things happened and I got a later-than-hoped start Saturday morning. It was an exit filled with “disaster”. I was supposed to make chicken and dumplings in the Dutch oven so I headed off to the store to grab the ingredients (never mind that I had all week off to do it). As I was leaving the store I realized I’d left the Dutch oven at home. Whoops. Once I’d fixed that problem I hit the road. It was cool with a light drizzle and had been raining all morning. I texted someone on site and asked about the weather. It was so clear there everyone thought I was joking.

Alas, my troubles weren’t over. I realized after passing the last store for miles and just minutes from the group campground that I’d forgotten to pick up the ingredients for the dumplings. Doh! I also quickly realized I’d forgotten something for Sunday’s mountain man breakfast. Off to a great start! Fortunately we had more than enough food though I did get ribbed about the missing chicken and dumplings later in the evening.

I finally arrived around 1pm and quickly got busy setting up my hammock. A group of the campers were kayaking Ocean Pond and I wanted to be done when they returned. I had taken advantage of a Black Friday sale and acquired another hammock that quickly arrived in time for this campout. I decided to try a longer hammock and one without a net of any kind. I opted for the Lite Owl from Wilderness Logics. The Lite Owl is a double-layer hammock rated to 250 pounds and a specified weight of 20 oz. On my scale it weighed in at 18.2 oz or 22.2 oz with toggles and 6′ tree straps.

When I unpacked the Lite Owl in the backyard I couldn’t get over how velvety smooth the material felt. I already had my Light Hiker hanging so I was able to quickly change them out. It was love at first lay. Um, er. I don’t want to deviate too much from the weekend’s events so stay tuned for a full review.

I was pleased to learn that I wasn’t the only hammock hanger. Unfortunately that also meant that the primo spots were taken. No worries. It’s a forest. Plenty of trees. I selected a site in a now-dry cypress swamp well away from everyone. I was asked why I was being snobbish but suggested that I was really being considerate in the possibility that I might snore during the night. Not that I do, of course. 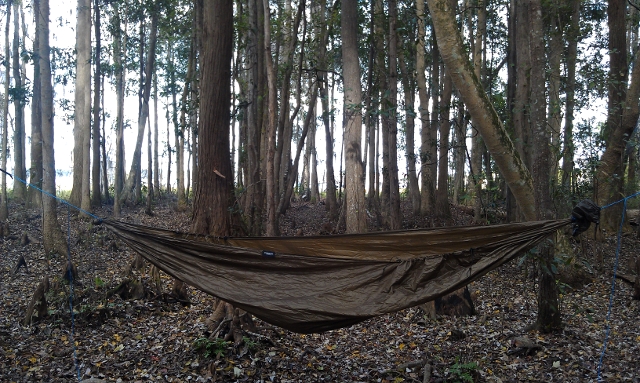 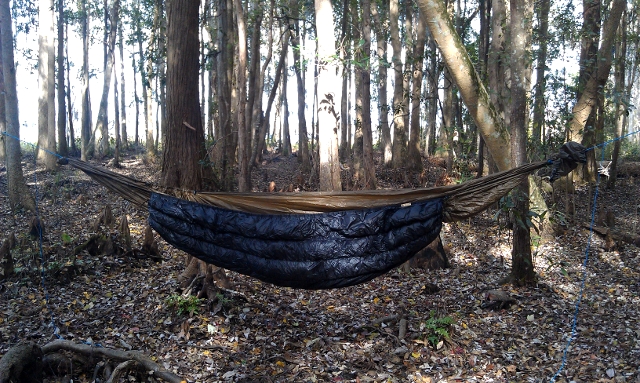 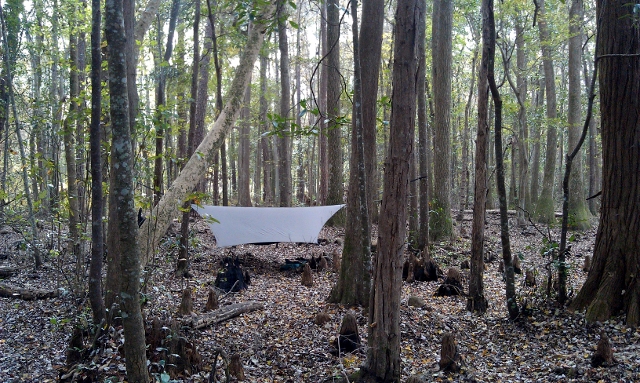 Once my hammock was setup I joined those that had paddled in along with those that were around the campfire when I arrived. We chatted for a bit and then everyone started pitching in to prepare for dinner. The spread of food was simply wonderful.

After dinner the chapter presented awards recognizing our Membership Chair and Section Leader for their tireless efforts. Then it was on to the gift exchange which was filled with fun. Afterward everyone moved back to the fire for a great evening of fellowship. The fire was stoked and burning hot. A few short hikes were thrown in throughout the day as well in a minor effort to burn off some of the grazing and feasting we’d been doing.

As evening neared morning we started losing people. Actually we lost one member before dinner. Unfortunately his wife had to be taken to the hospital and remains there with pneumonia. You’re in our thoughts and prayers Eugene et al. Shortly after midnight I turned the last lights out at the pavilion and headed to my hammock.

Let me tell you something about cypress swamps. Mosquitoes love them! Do you remember me saying that this hammock didn’t have a net? Well poo. :-/ What’s a guy to do? Why use his new skeeter killer of course!

I fired this puppy up and set it under my hammock. When I first arrived at the hammock my headlamp showed them swarming underneath. They were also congregated under the tarp near the ridgeline. This must’ve worked pretty well because I only woke up a few times as they buzzed around me. I don’t think I have any bites either. Although it’s got some weight to it this seems to be a good alternative to a net. The downside is that I’m sure its effectiveness diminishes in even a slight breeze.

While I found the hammock very cozy and comfortable I didn’t sleep that well. Despite being deep in the woods the second sun that was installed near the bathroom seemed directed directly into my hammock. I was facing away but it still lit up the entire area. Worse, though, was that despite all of the food I’d managed to consume I found myself hungry. I was dumbfounded. This pattern actually repeated itself all week so I can’t say my sleeping problem was due to the hammock. For some reason I seem to have gotten up every night this past week to eat again around 2-3 am. I finally fell asleep for good around 4am but I was up at 6:30 and out of the hammock before 7 to start breakfast.

I fired up the Dutch oven and with some borrowed bacon got busy on a mountain man breakfast. It seemed to go over very well and I came home with less than half of the 12-qt portion. I think I’ll try it again next time but I’ll definitely prep the ingredients at home. I spent way too much time this morning and that left people waiting. Fortunately another dish was going at the same time which finished sooner.

After breakfast we helped each other break down tents and pack whatever gear we had. As one of the last to leave I decided to try to catch a few Zs before pulling up the stakes. There was a gentle breeze in the air and but for a lone boat off in the distance only the sounds of the leaves falling to disturb me. 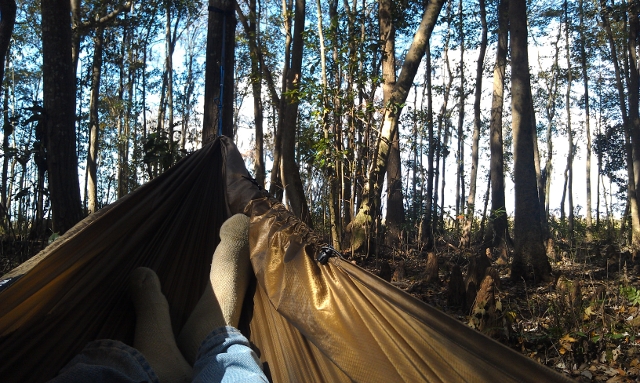 Unfortunately the skeeters decided they wanted to keep partying so I packed up and called it a weekend.

Vacation is over now. In a few short hours I’ll be heading back to the drudgery of work. At least I have some great memories to carry me away during the day.