Today I received a new item for the arsenal and I hope it’ll drop about a full pound off my pack. When I was at the Buck Lake hang I had a chance to try a Switchback hammock. Last week I ordered a smaller and lighter version known as the Light Hiker. It’s spec’d out at 24 oz unrigged. On my scale it came in at 32.7 oz inside the bishop bag and this included caribiners and straps. My Hennessy is 43.8 for a total current savings of 11.1 oz.

The hammock arrives in a bishop bag with whoopieslings. 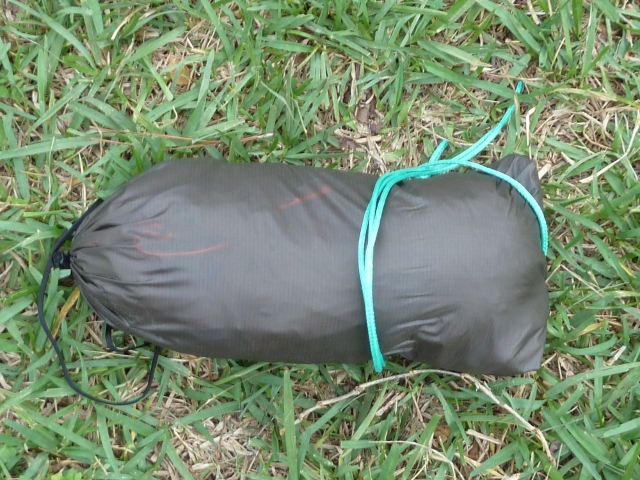 I have two 6′ tree straps for mine but they’re polyester and I’ll be making some longer ones from polypro webbing. Setup was incredibly fast at just under 5 minutes and I’d never seen one before. I simply wrapped one strap around the tree running it through the other loop and put a carabiner on the other loop. I attached the whoopie to the biner and grabbed the other whoopie pulling the hammock out of the bag along with it. Then it was just a matter of repeating the process with the strap and biner on the other end. 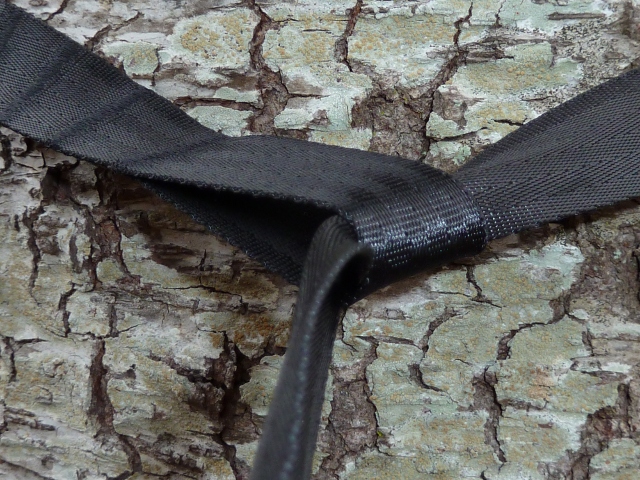 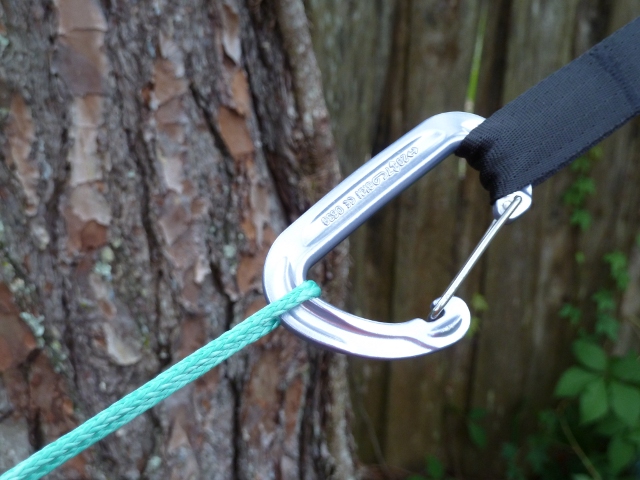 I haven’t had much time to play with it but my initial impression is very positive. I have to admit that it is so much nicer, so, so much nicer sitting down and swinging my legs into hammock instead of doing the bottom entry. The Light Hiker has bug netting that can be quickly and easily moved out of the way by unzipping the two full-length zippers on either side. Two pulls are provided for each zipper and have small lines attach inside and out. Once unzipped the netting is secured to the non-structural ridgeline (shown here in orange) to keep it out of the way. 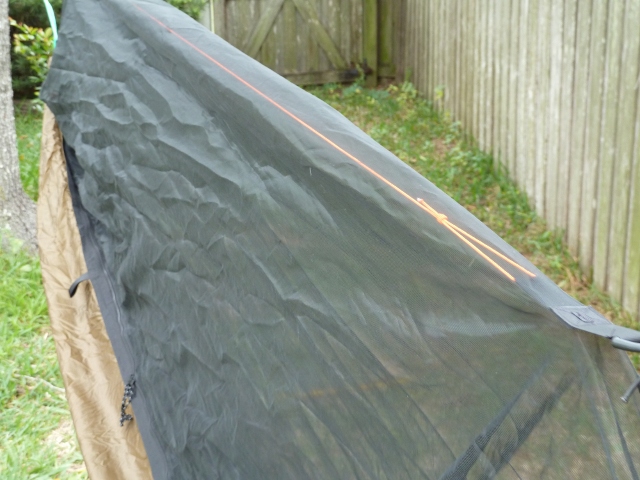 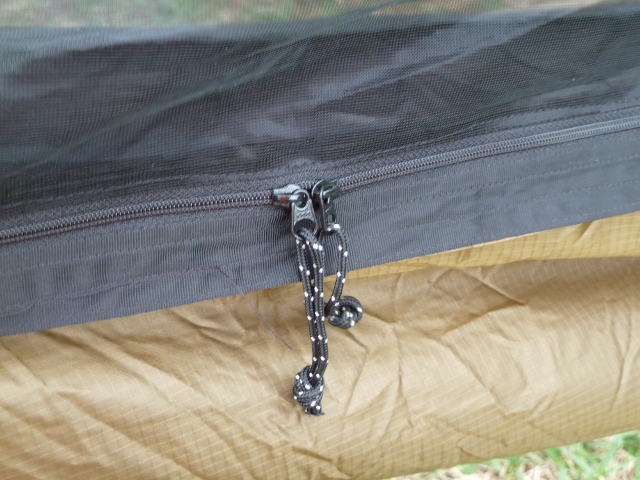 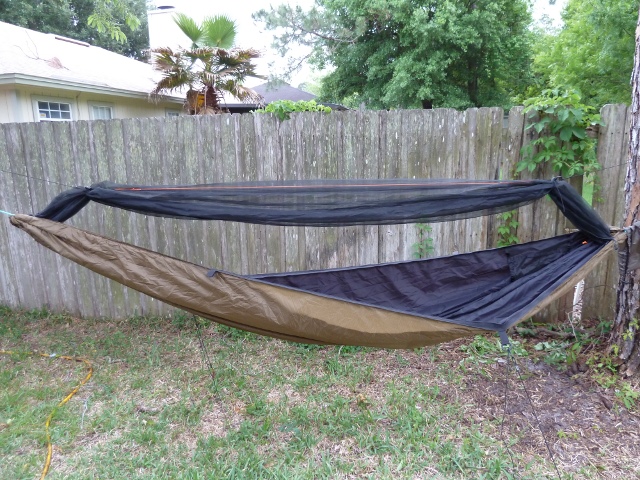 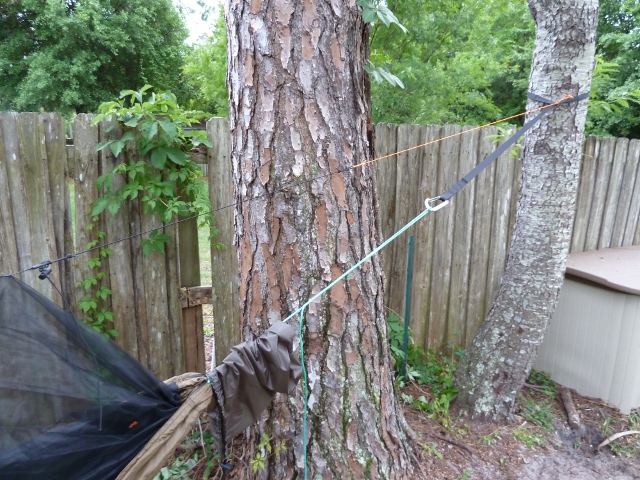 There are four tie-outs on the hammock but for some reason only two have D-rings. I’ll probably pick up some lightweight ones so I have all four covered. If you have wide shoulders it’s not a bad idea to use the tie-outs on either side of your torso to help avoid a potential shoulder squeeze. I didn’t really have that problem but others have made note of it.

Inside the hammock you’ll find two small gear pouches on opposite ends/sides. 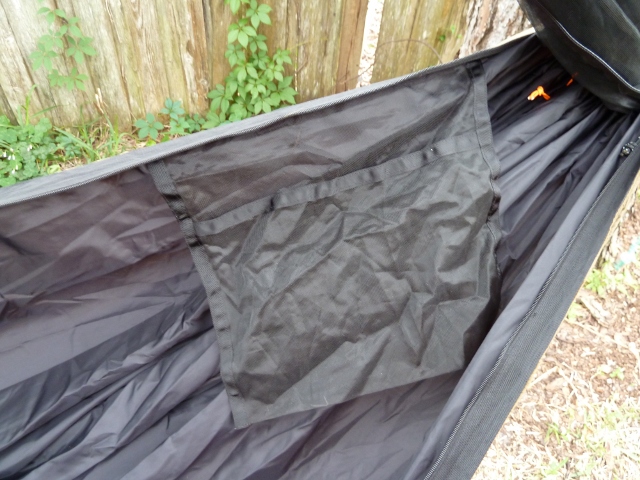 There are also ties for holding a gear bag, pillow, etc. 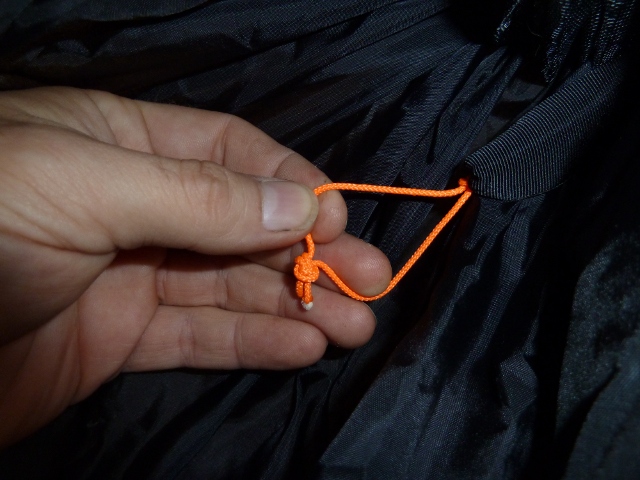 The Light Hiker sports a double-layer construction with 1.1 ripstop which allows you to insert a foam pad, space blanket, etc to help protect your backside from the heat-stealing air. The inner layer is secured to the outer with two short strips of Velcro. I wonder if one or two more might be handy as there seems to be some sag with the upper moving away from the lower. We’ll have to see how it works in practice. 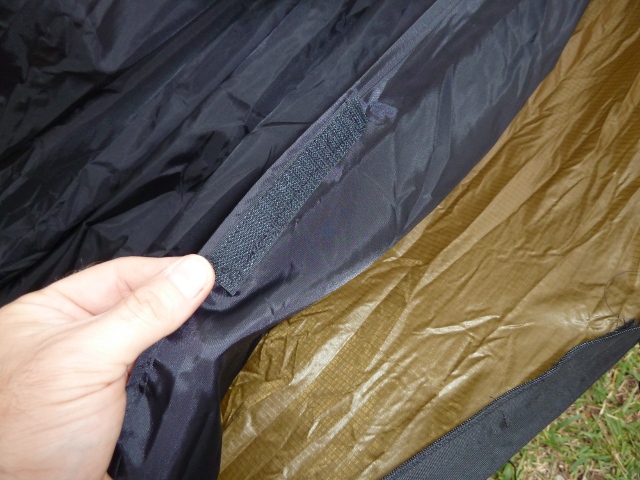 When you’re ready to breakdown it’s possibly even easier than the incredibly fast setup. Prior to starting the breakdown I lay the ridgeline and tie-out lines lengthwise along the hammock in an effort to keep things tidy. 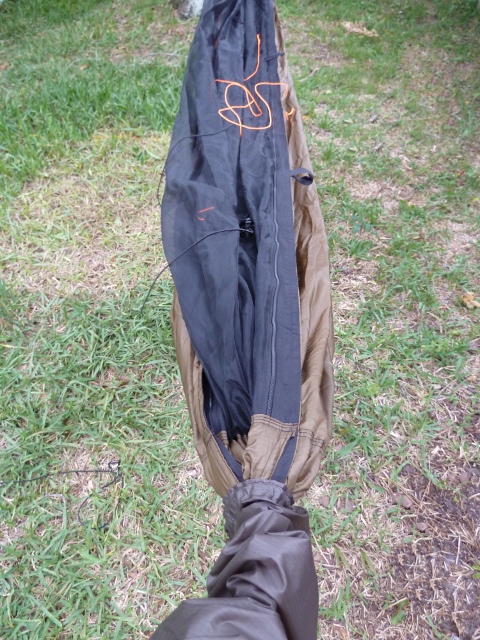 My method is to hold the whoopie on the bishop bag end removing it from the biner. Keeping tension on the hammock you simply begin stuffing the hammock and lines back into the bag until everything is secured. Remove the straps and biners from the tree, fold the straps, and place everything in the bag. I then lengthen the outer whoopie to provide enough line to make a couple of wraps around the hammock (as shown at the top) just to keep it from dangling. And that’s all she wrote! 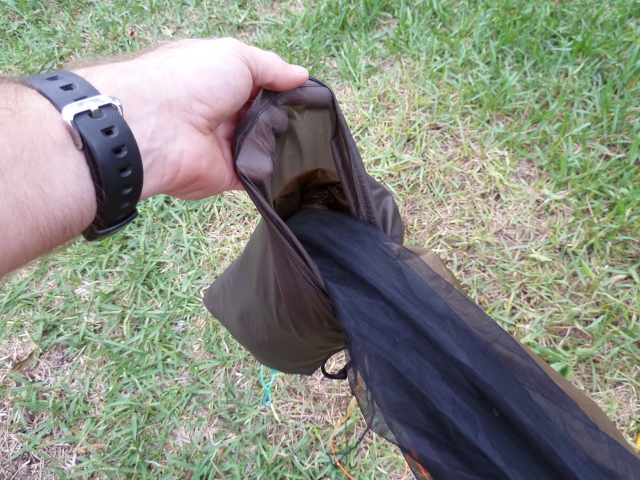 I’ll be able to get some sleep time in the hammock this weekend but for the little time I’ve had with it I’ve found it to be very comfortable. I think I’m going to be very happy with this new acquisition.