I woke up a little after 7 am and decided to start the day. One benefit to camping away from the shelter like I did is that I could do everything with minimal noise that might affect my fellow hikers. It was obvious that I was the only one stirring and I didn’t want to wake anyone. Rather than firing up the stove (since I left the alcohol stove home for this trip) I had a quick breakfast of a fresh apple and orange I’d picked up in Hot Springs. I was packed and sneaking out of camp before anyone knew it. Goodbye Groundhog Creek!

I ran into my first northbound hikers just beyond the sign marking the shelter. They must’ve gotten an early start because they were already taking a break. Hopefully they didn’t wake anyone as they headed to the shelter for water. I’d run into a couple more hikers along the way but not as many as I’d expected. Later, when I arrived at the hostel, they told me nobody had stayed there the night before. I guess everyone was still stuck in the Smokies.

The climb out of the shelter wasn’t bad. It wasn’t as good as ridge walking but the grade went around  rather than up so it was more bearable. Unfortunately, an apple and orange don’t last very long. I only made it a couple of hours before I had to stop for another snack. I picked a pretty good place, though. I decided to hold off until I reached my last summit…Snowbird Mountain. This would mark the last real uphill climb. From here on out it was downhill. 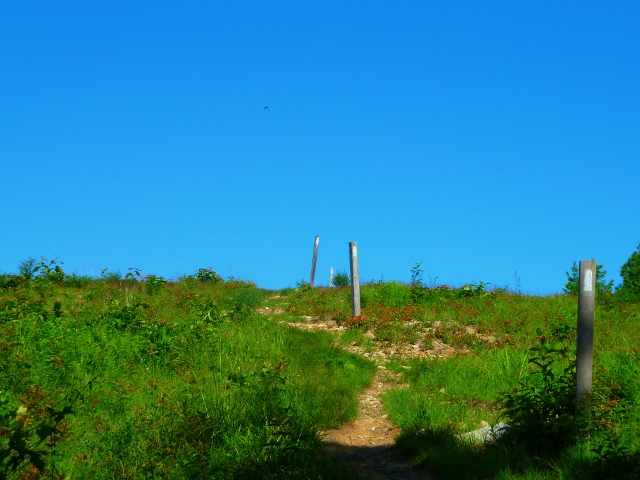 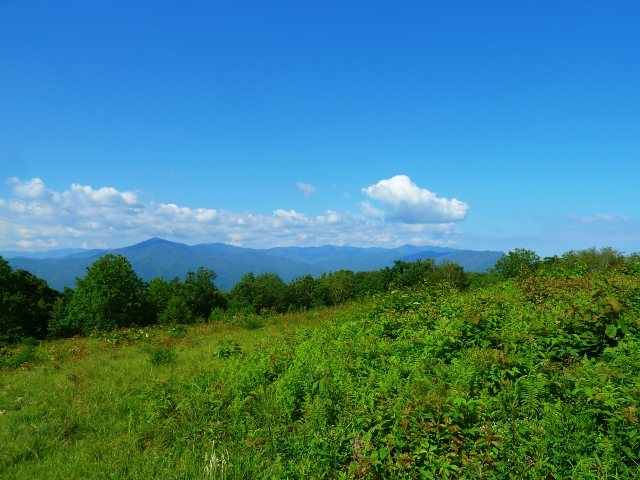 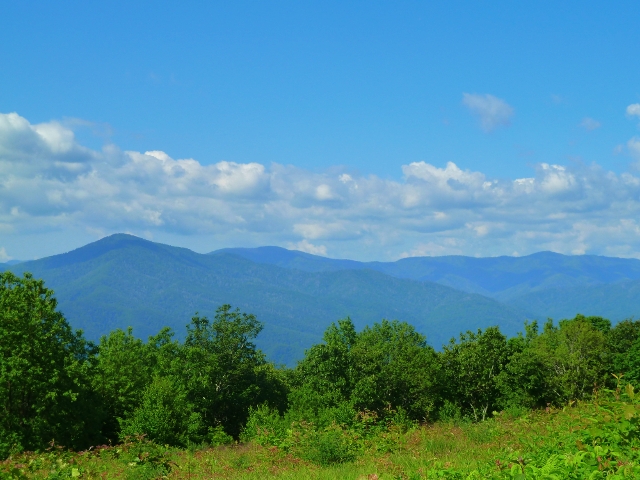 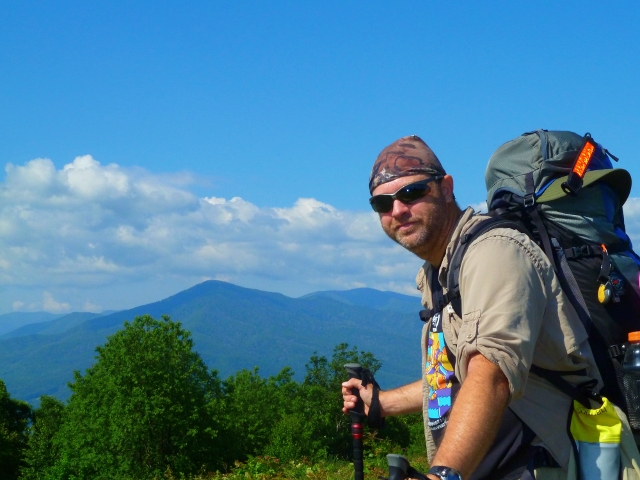 Gratuitous Self Portrait to Prove I was Really There

I really loved the climb up this last mountain. I don’t know if it was due to what it meant in the grand scheme of things, or if it was the posts marking the way that drew me in, or just what exactly it was. Regardless of the reason behind it Snowbird just felt, well, cool. It was the perfect spot to drop my pack, take in some early morning sun, have a snack, and watch Buddy graze. 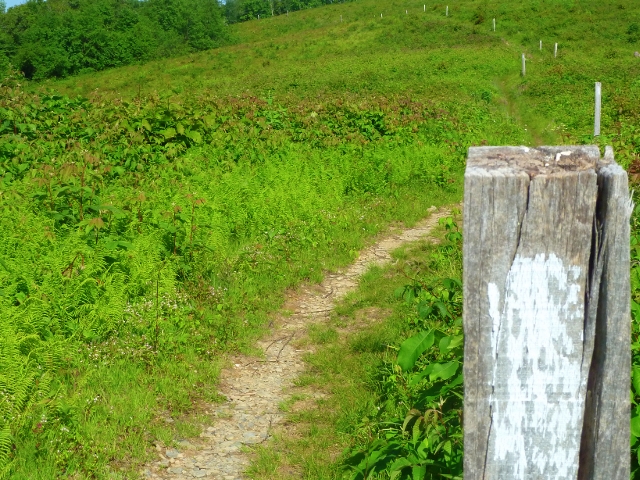 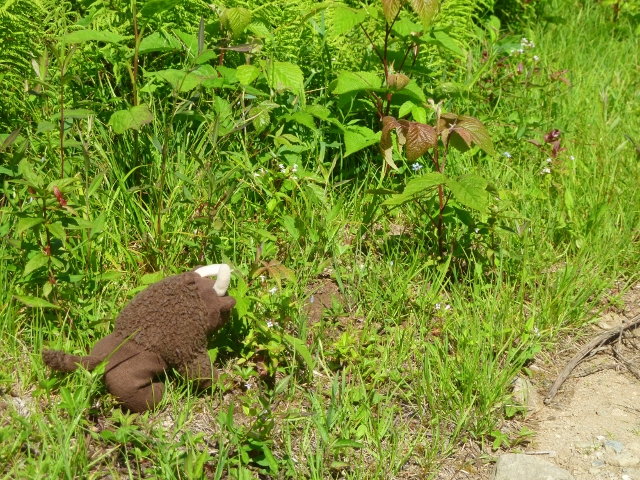 I was disappointed about one thing on Snowbird. When I see the word “tower” I assume it’s something I can climb (whether right or wrong). From the moment I left the shelter I couldn’t help but have grand visions of epic panoramic views from atop the final tower. So travelers be forewarned that the FAA tower on Snowbird Mountain won’t do much for you. 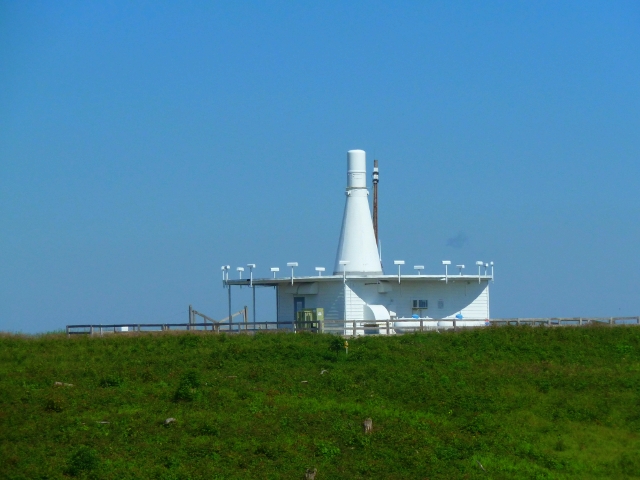 Disappointment of a FAA Tower

Having rehydrated and refueled it was time to hit the trail for the final leg of my journey. As I left the grassy bald of Snowbird Mountain and stood at the tree line I couldn’t help but turn around to ingrain the scene once more in my memory. 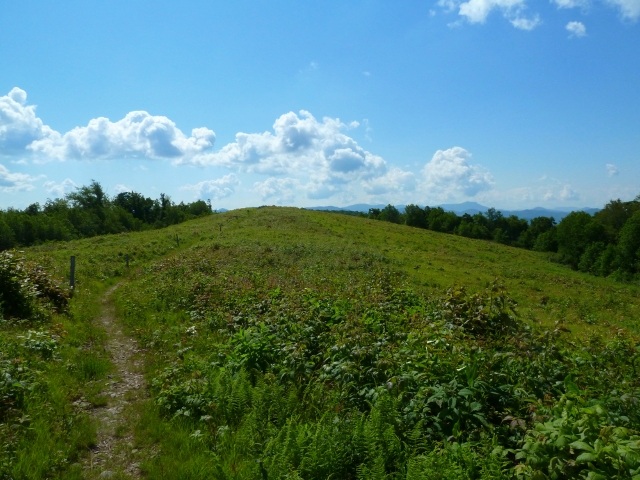 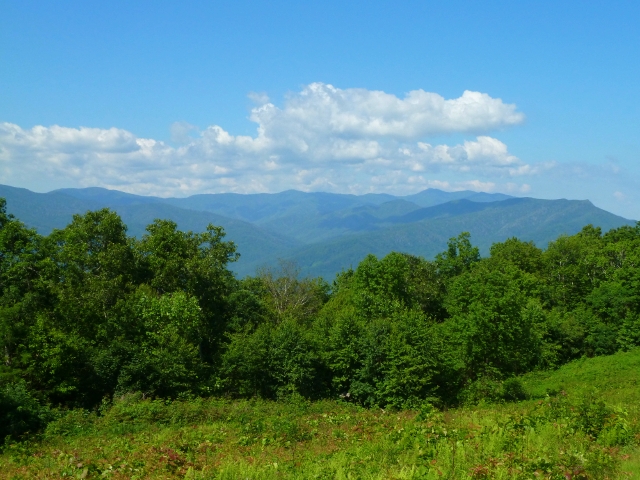 The remainder of the journey was very quiet. There was, however, an abundance of bird activity. While most birds are muted in appearance I thought someone had left behind a handkerchief or something at one point. About 20′ in front of me was the most brightly colored bird I’d ever seen. Unfortunately he was gone before my camera was ready and I never saw him again. His brilliant red stood in huge contrast to the greens and browns surrounding me. It would appear that it may have been a Scarlet Tanager however I don’t recall his wings being solid black. I only recall two small black marks. No matter what he was he was gorgeous. Other wildlife would elude me until about 1.5 miles from the hostel when a northbound hiker scared some wild turkeys my way.

I made my way down to Green Hornet Road and turned right towards the hostel. I wasn’t really looking forward to the gravel road walk but it did mean the end was near. I came upon my last hiker as he was re-filling his water. He had just started that morning after hitchhiking. He followed me up to the hostel but he was gone before I knew it.

When I made my triumphant entry back to the hostel there was no fanfare. No trumpets blaring. No regal gown cast upon me. Instead Curtis and Rocket continued to relax in the kitchen while I guzzled down a nice, cold soda. Oh well. 🙂

Let’s talk about soda for a moment. I’m not a Pepsi fan by any stretch of the imagination. If you hike, then you know how certain thoughts and post-trail desires creep into and fully occupy your mind. For me on this last day it was an ice cold Coke. I thought of little else. To my utter dismay, though, Standing Bear Farm deals in Pepsi products. I was aghast! However, I decided I wanted a cold drink and it could be anything other than filtered water. I grabbed a Mountain Dew Throwback. Let me tell you, that stuff is like crack. It goes down smooth and in no time I was back at the fridge for another. I think I’m now addicted and guzzle a couple (or more) a day. I need therapy.

With a sugar high fueling me I decided I couldn’t wait any longer. I grabbed my clean clothes and jumped in the outdoor shower (don’t worry folks, there are walls so I didn’t scare any wildlife to death). Thank God I realized the hot and cold faucets were reversed because it nearly took my breath away as the ice cold water hit my head. Soon, however, I was reveling in the hot water flowing over me and washing away the dirt, grime, and smell. I stepped out feeling renewed and refreshed.

I said my goodbyes to Curtis and Rocket, loaded up the truck, and headed back to I-40. It was a great ride home and left me wanting more. As the sunlight faded and darkness took its place I was rewarded with one final scene. I’ll leave you with that in the hopes that when you need to escape you’ll think back to the beauty that’s all around us if we’ll just open our eyes. 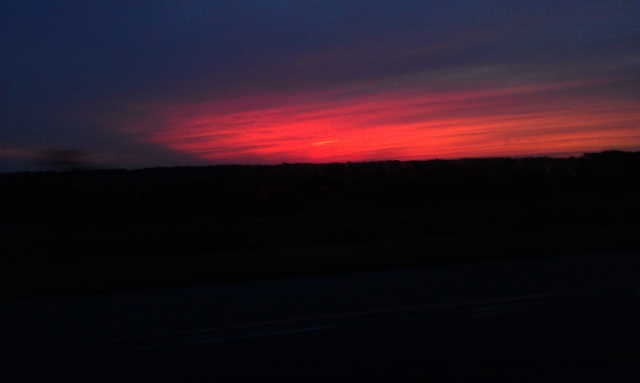