This morning I decided to see what it’s like using the pot support and stabilizer. What better way than to whip up a nice little breakfast? Today’s mission? Pancakes. Mmm.

You can’t really start breakfast without a nice cup o’ joe. So first off I fired up the JB and boiled my water. 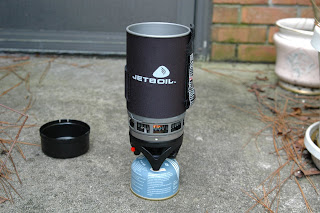 It wasn’t long before the water started to boil. The “Jet” part of the name is pretty accurate. 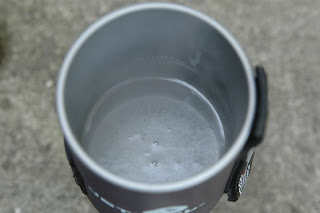 Once I had a nice boil I just turned the stove off, removed the cup, and added the coffee. 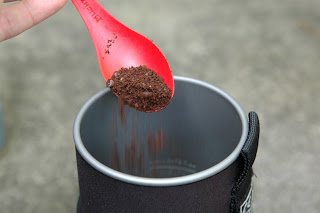 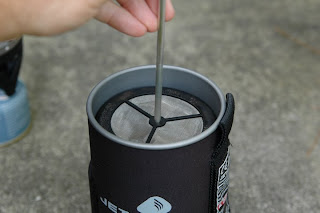 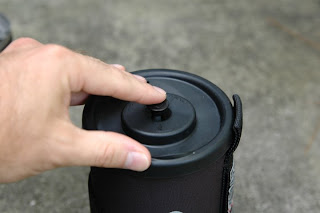 Ok, so with the coffee steeping it was time to start breakfast. I used Backpacker’s Pantry pancake mix. Just add 3/4 cup water and mix. It’s kind of hard to get in the corners of the bag to get everything mixed in. I also couldn’t get all the clumps out. 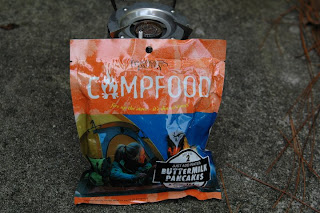 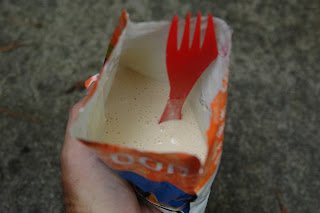 Here’s my word of warning. Be sure to have the flame on LOW. I had it too high and almost immediately warped the bottom of my GSI pan. I’m really hoping I didn’t screw up the nonstick coating. 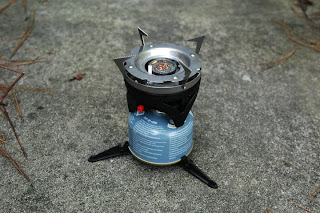 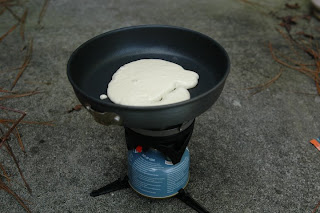 Here’s an issue of concern. With the jet flame right in the center of the pan everything burned in the middle. I don’t think I had a single pancake that came out unscathed. I wonder if the actual Jetboil cookware fares better at distributing the heat. I also wonder if other stoves like the Giga Power have the same results. 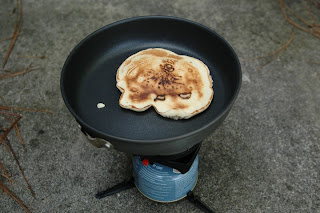 I was surprised at how much the little pack actually made up. When it was all said and done I had eight pancakes filling my Light My Fire kit. 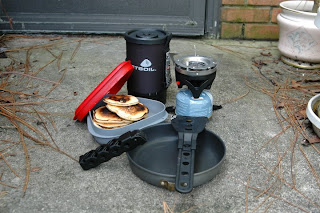 I cheated a little and took everything back inside to eat. It was a nice, filling breakfast. Overall time including prep was about 25 min. Probably a lot longer than I’d want to spend if I were actually on the trail but really not too bad if you’re looking for a filling breakfast and not in a rush. 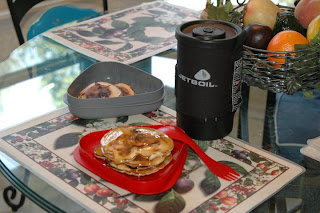 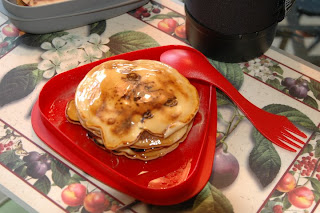 As you can see, I did manage to clean my plate. 🙂 If you see the remnant in the other portion of the kit, I decided to save a little for my son so he could try it. 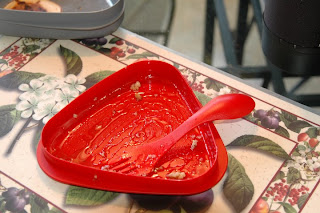 Overall I thought things went well. I’m curious about the Jetboil cookware but it’s very expensive. Fortunately, I was able to push the bottom back flat when I pulled the last pancake off and hopefully I got it true enough. I also noticed that the heat did a number on my GSI spatula. It really gave it a beating. I’ll have to see if something else holds up better.

One thing I can say is that it didn’t take any time at all for a drop of water to boil on the pan once I put it on the support. I think I’ll probably stick to just boiling water but at least I know that it’s a viable cooking platform for pots/pans also if needed. You just have to be more careful.