One thing I have been envious of our Georgia neighbors is their availability of quality trails education. It seems that every time I turn around I’m seeing something about a new series of courses geared towards training the layman in trails-related curriculum. While it’s my understanding that Florida actually gets more funding through the Recreational Trails Program it seems that Georgia does a much better job of putting it to use.

As luck would have it, though, I was forwarded some information on an upcoming series and it looked like my schedule was actually clear. Even better was that the Florida Trail Association would fund the training out of the trails budget. Friday rolled around and I was headed north. Seven hours later and I arrived outside Atlanta at my hotel in Buford, GA.

Saturday morning I headed about 20 miles further north to the Gainesville campus (actually located in Oakwood) of the University of North Georgia. The class was full with 12 students from a variety of backgrounds. Florida was well represented with 5 of the 12 seats. Other students worked in parks & recreation, were self-employed arborists, SORBA volunteers, etc.

Saturday was the first of the three-part series: trail design and layout. The courses were taught by Walter Bready. The morning session was very educational as we covered a variety of topics. The presentation was provided by IMBA but the information is, for the most part, universal regardless of whether the user is on foot, on wheels, or on horseback. Following lunch we met outside and Walter had flagged off three spots on a hill in the woods. We were divided into groups and each group had a flag on the bottom and top. The goal was to use our clinometers to first get a grade of the hill and then map a path to the top flag following the half-rule. 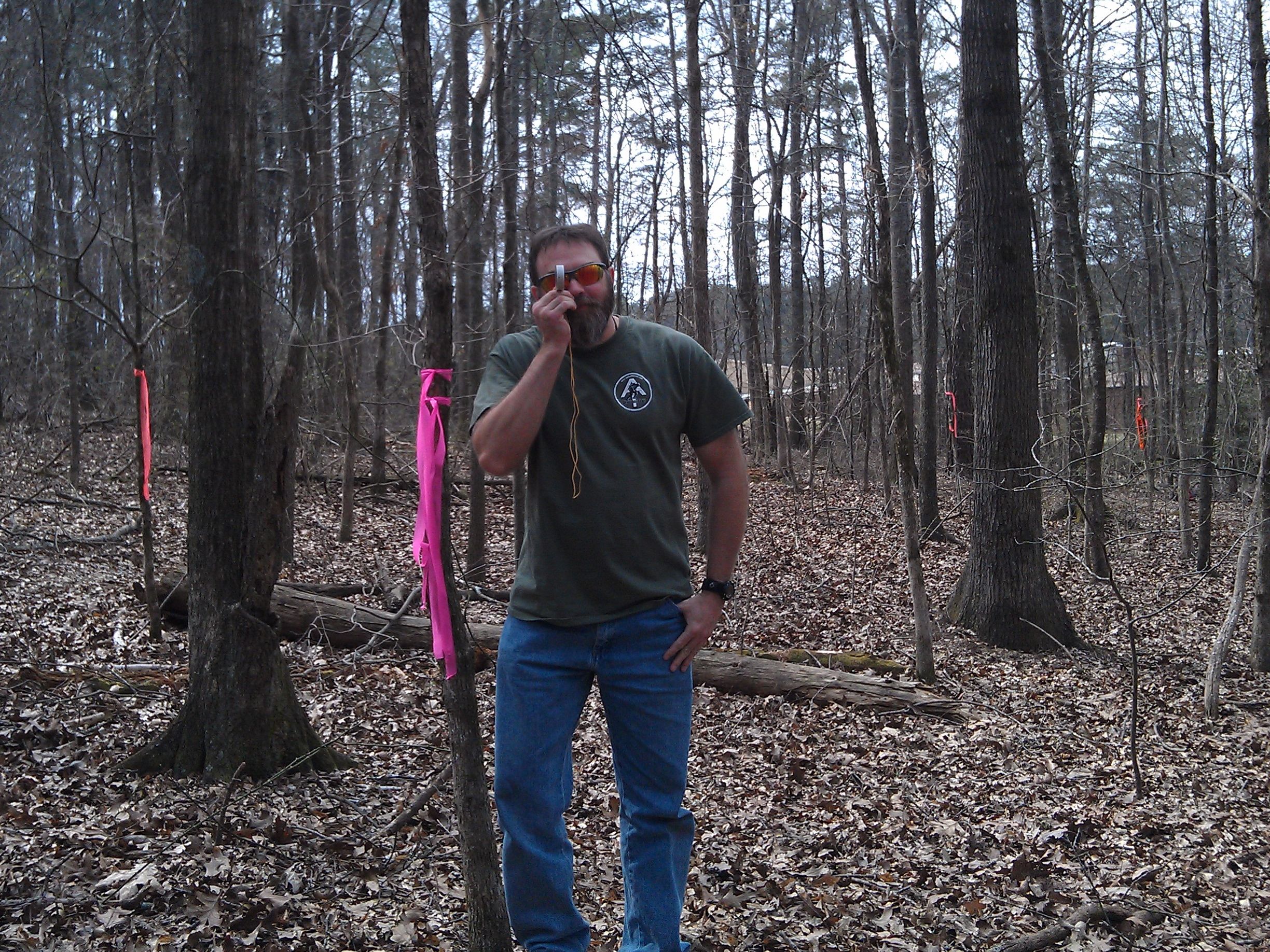 In the picture above I’m shooting a line up the hill to my partner. Prior to starting the exercise we had to “zero” the clinometer to our partner. As we worked our way up the hill we all took turns shooting and re-shooting the grade to make sure we all understood how it worked. The pink tape is ours. The orange belonged to team 1.

I think the consensus among the Florida participants is that we all would have liked more information on wetlands design. I know this is an area that’s very critical to my success due to the large number of boardwalks and bridges throughout my area of responsibility. Regardless, we all learned something and have skills that we can apply as we return to our respective FTA chapters.

Day two was the really cool stuff: trail construction. Following the layout of the previous day we started with a morning classroom presentation. We covered the critical aspects of bench cutting the trail and ensuring you avoid potential erosion issues through proper design. Again, with much of Florida being flat I’m not sure how much the specifics will play into what we do but I still think we all learned some good practices to follow.

The afternoon field exercise was to cut a section of trail as a connector on the existing bike trail. There were numerous bikers and runners out while we were doing both field portions and this trail was planned for the kids to use. Walter had already rough flagged the trail and our job was to cut it in after a pin flagged it. This gave us the lower edge of the trail to follow and we had been told to cut a 3′ tread.

This shows the trail after it was pin flagged and before we started working on it. In addition to the leaves and other debris we also had to remove a number of rotting tree sections. 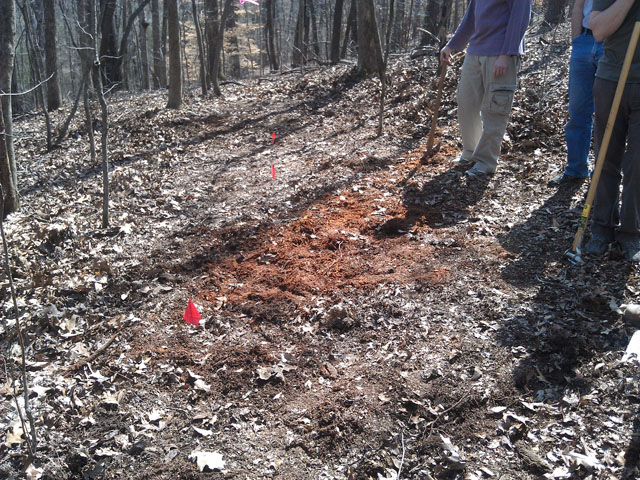 The first step of the process was to remove the top layer of organic material (leaves, etc) until we reached good mineral soil. We used the McLeod and shovels to rake away the slough. Loppers also proved invaluable. They made it very easy to remove roots from the proposed tread without displacing a lot of soil that would have to be fixed later. 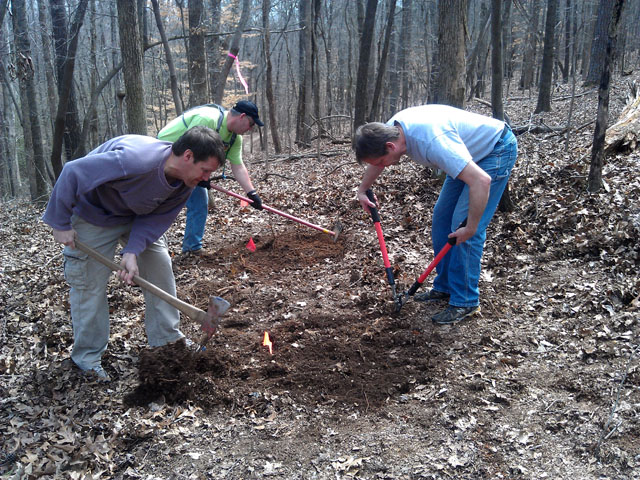 As the organic layer was removed we used the McLeod and pulaski to cut the trail into the hill. The McLeod works particularly well at this since it’s got a wider head. It was also the tool we used to estimate our 5% tread outslope to promote proper runoff. 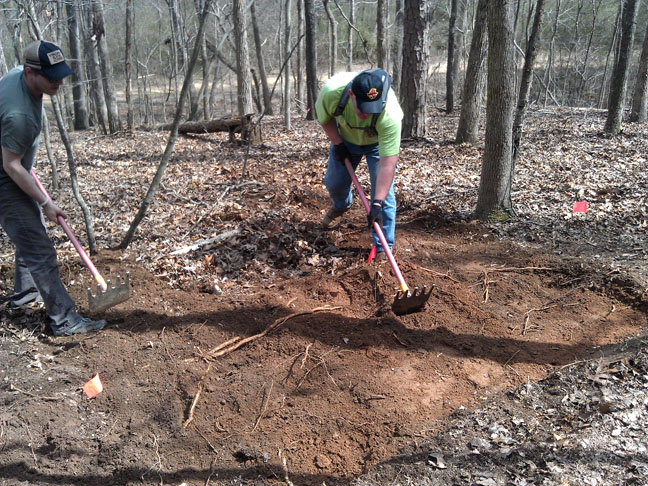 As we cleared the section the organic layer was thrown uphill. It would be used later to cover our work and blend it in to make it look more natural. The dirt was dispersed on the downhill slope. Here are some of my fellow Floridians demonstrating the proper way to remove a small tree. A pruning saw was used to cut the top off with about 3′ being left above ground. This provides a handle to grip and move back and forth while another person uses a pulaski to cut around the base through the root ball. Once the root ball is cut the makeshift handle also makes it easier to lift and remove the stump. 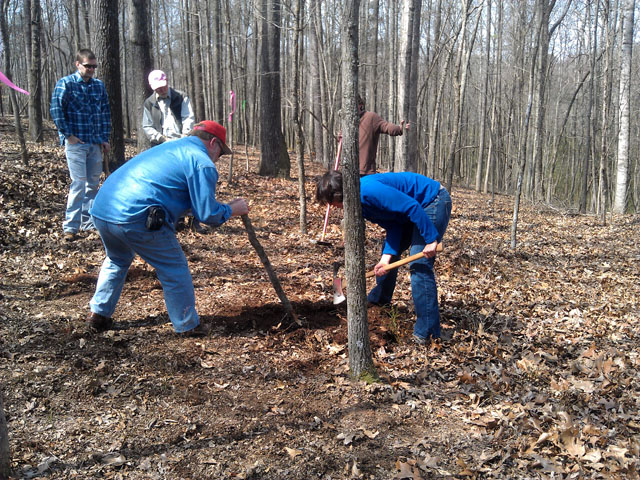 Looking at the following image you can see several things. Down the middle of the image you can make out the gentle backslope we cut. You can also see how the McCleods have compacted the tread to create a more durable surface. What isn’t shown in this image is how the organic debris would be spread out to the right of the flags to cover the mineral soil that had been dispersed during the cutting process. 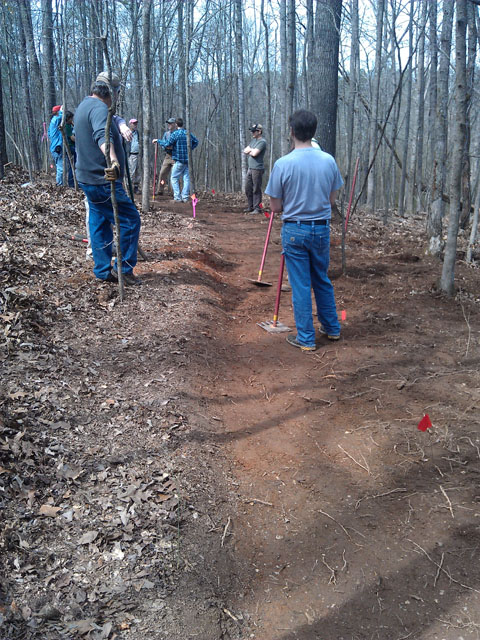 Overall we had a wonderful time and walked away with a number of new skills. I think we’re all excited about getting out on our own sections and putting these skills to work as well as sharing them with our trail crews. We’re hoping to start doing some of these workshops locally. Only one person stayed for the final day of crew leader training. It’ll be interesting to hear how that went.